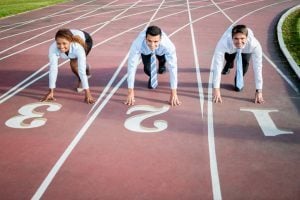 All the Biglaw buzz right now may be on bonus announcements — or the lack thereof, but money isn’t the only way for a firm to distinguish itself. In the midst of an altogether furious lateral market, particularly in transactional spaces, Kirkland has added another arrow to the brand quiver, deciding to shorten its equity partnership track to nine years.

The partnership track that defined the industry for decades put associates up after eight years. Despite Biglaw quietly pushing out that timeframe over the last several years, its vestigial impact remains in the salary and bonus charts that top off after eight years before dropping senior associates into the twilight realm of “Class of 2014+.” Kirkland isn’t ready to return to Biglaw’s glory days, but it’s hoping to shake things up by pulling back from the 10 or more year tracks that firms have increasingly adopted.

Weil already shortened its partner track by a couple of years back in 2018 without generating many waves. That said, Weil isn’t the behemoth that an “Am Law 1” firm is. Though Kirkland’s status as the top grossing firm around could also blunt the impact of this decision, with firms writing off Kirkland’s move on the grounds that Kirkland operates in a class of their own. The firm already pays a premium over market bonuses and firms feel no pressure to match that.

And not for nothing, the firm has a history of losing partners in the lateral market dating back years. Whether it’s just natural attrition or the firm getting a little passive-aggressively cutthroat nudging equity partners out the door if they don’t produce, turnover would make it less skin off Kirkland’s tail to make partners earlier and course correct if that doesn’t work out. Other firms still treat equity partners as “made men” (or women or other) without giving them the Tommy DeVito treatment for not making quota.

But even if tightening up on partnership tracks isn’t an option for every peer firm, it’s certainly on the table for some of them. As midlevel experience in corporate markets is at a premium, dangling a shorter path to partnership could be a key incentive.

Because most firms in the Am Law 100 playground have the resources to keep matching bonuses, but loosening the iron grip on profit-sharing? That’s going to cause some firms to flinch.